Goulash is a Hungarian dish, gulasch: soup, or stew. It consists of meat (beef, veal, pork, lamb) cooked in a sauce and with assorted vegetables seasoned with paprika (that tastes hot). The dish is spiced up with not only paprika but spices and herbs depending upon the cook’s experimental nature. It is served as a stew, or soup. Spices like bay leaf and wine are optional.

For vegetarians, the goulash is sans meat; in the place of meat more vegetables of different kinds are added (depending on one’s taste or availability of vegetables and some such). Vegetables used in preparing goulash are carrot, onion, potatoes (optional), parsley root, peppers (green or yellow), celery, onion, garlic, caraway seeds, paprika, tomatoes, sweet potato, thyme and parsley.

In Hungarian, gulyashus literally refers to herdman’s meat. It is one of the national dishes of Hungary, and the biggest culinary export to central Europe and other parts of the world.

Goulash soup is one of the dishes in the cafes and restaurants not only in Hungary but also in Austria, Germany and Switzerland. It is a common dish that is served during the day. It is one of the comfort foods in Hungary and its neighbours: spicy and restorative.

In the featured photo of this text, goulash is prepared by István Sándor, a Hungarian and a practising devotee of Hare Krishna movement, ISKCON. His specialisation is Vedic food. In the vegetarian goulash he cooked, for more than two dozen people, on wood fire. The ingredients he used are carrots, parsley root, kidney beans, paprika and paprika powder, ground pepper, fresh peppers (yellow), asafoetida (hing), mustard oil, salt to taste, bay leaves and green pepper and parsley. He did not use onions and garlic. Potatoes, sweet or normal, are optional. 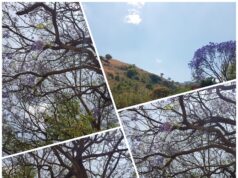