The Telugu World Column No: 39

Not many may be knowing that Sadhguru Jaggi Vasydev is a Telugu man. Born in September 1957 in a Telugu family at Mysore in Karnataka, he is a yogi and author. He was, in 2018, estimated to be the alleged owner of an empire worth Rs.1,100 crores at the vast Isha Foundation campus at Coimbatore on Tamil Nadu-Kerala border.

Like two other Yoga gurus, Sri Sri Ravishankar and Ramdev Baba, his Foundation also markets several products and this led to snide remarks that religion is the best business in India. He has been constantly under attack for this, but maintains that the marketing was meant only to finance the Foundation’s many philanthropic activities. He says this alone saved him from going around seeking donations, for which too he would have faced much criticism.

Popularly known as Sadhguru, he leant yoga from Malladihalli Sri Raghavendra Swamiji and is the author of several books, including Inner Engineering: A Yogi’s Guide to Joy (2016). He addressed the United Nations Millennium World Peace Summit, the British House of Lords, Massachusetts Institute of Technology, the International Institute for Management Development and the annual World Economic Forum (in 2007, 2017 and 2020).

A bachelor in English from the Mysore University Vasudev taught yoga in the southern states since 1982.   In 1992 he launched Isha Foundation which runs an ashram, hosts a yoga center, and has been active in spiritual, educational, and environmental activities.

He was awarded the Padma Vibhushan, the second highest civilian award, in 2017. His father was an ophthalmologist with Indian Railways who was transferred routinely. Though his parents wanted him to study for an MA, he took to business. He did not initially show any spiritual aspirations but kept practicing asanas and pranayama daily. In 1982 he sat on a rock on Chamundi Hill and had a ‘spiritual experience’. He left his business to his friend and travelled widely. After a year of meditation and travel, he started teaching yoga.

His first yoga class in Mysore in 1983 had only seven participants and he kept shuttling between Karnataka and Hyderabad on a bike, subsisting on his poultry farm rental. He used to donate the collections received from his students on the last day of the class to local charities.

Soon his philanthropy, spiritual teaching and efforts to create harmony between body, mind and spirit made him famous.  The Isha Foundation acquired a world-wide reputation. His spiritual programs, schools, hospitals and social events in rural areas are all free.

Vasudev married Vijaya Kumari (Vijji) and has a daughter, Radhe. When Vijji died in 1997, her father alleged that Vasudev had murdered her, Vasudev asserted that she had attained mahasamadhi and said she had told him about it nine months before her death. The police investigation found him innocent. Radhe, born in 1990, a trained bharatanatyam dancer, married Sandeep Narayan, a classical vocalist of Chennai, in 2014.

The Sadhguru conducts Inner Engineering sessions at the Bombay Stock Exchange. The Isha Yoga Centre started in 1994 and had a course for the Indian Hockey team in 1996.   He started classes in the USA in 1997, and for life-term prisoners in Tamil Nadu prisons from 1998. ‘Inner Engineering’, Isha’s flagship program, teaches simple Yoga practices. The Shambhavi Mahamudra is a corporate leadership program and teaches the technology of mental well-being, keeping up with work rigors and handling depression. He says a University of California study found mahamudra led to neural regeneration up to 21% in the brain. His critics say “the study appeared in a fringe journal published by a discredited alternative medicine advocate and his allies, and merely reports lower levels of subjective stress from a medium-sized uncontrolled group practicing yoga daily for six weeks.”

He claims his guru Palani Swami entrusted to him as a life mission the creation and consecration of the Dhyanalinga, a sculptural stone structure 13’ 9” tall. The sculpture arrived in 1998. The Dhyanalinga Yogic Temple, a meditative space not restricted to any faith or belief system, was completed in June 1999.

Adiyogi, designed by Vasudev, a 112=foot,  500-tonne, Shiva statue for inspiring and promoting yoga, was inaugurated by Prime Minister Modi. The Guinness Book of World Records lists it as the ‘Largest Bust Sculpture’ in its Incredible India campaign. Tamil Nadu government has since claimed it was illegal and that no approval was given. The Comptroller and Auditor General said it violated biodiversity zone rules. The Maha Shivaratri at the  Isha Yoga Centre every year is a big affair. He also set up a Linga Bhairavi temple in Coimbatore with women conducting rituals.

Isha Foundation has consultative status with UNESCO and is accredited to the UN Convention to Combat Desertification as an observer. Prime Minister Narendra Modi praised the foundation for contribution to Swachh Bharat. The environmental projects of Isha include Project Green Hands, awarded the Indira Gandhi Paryavaran Puraskar, Rally for Rivers intended to rejuvenate depleting rivers by growing large forests along their bank and Cauvery Calling, widely criticized as unscientific, that supports farmers to  plant 2.4 billion trees through agroforestry, covering one third of the Cauvery basin with trees.

However, environmentalists and liberal intellectuals allege that it presents a simplistic view of river conservation, sidesteps social issues, and may harm tributaries and wildlife habitats. A Public Interest litigation has been filed in the Karnataka High Court questioning the legality of the fundraising for the initiative, and the use of government owned land for a ‘private purpose’. In January 2020, the High Court asked the Foundation to disclose its fundraising practices. Critics claim that Vasudev shares the ideology of BJP’s  Hindu nationalism and takes an “intolerant nationalist” stance.

He is hated mostly for holding that Muslims’ rule was oppressive and worse than that of England. Though a spiritual leader, the Sadhguru is always surrounded by controversies. The criticism is mostly due to political stands on both sides. 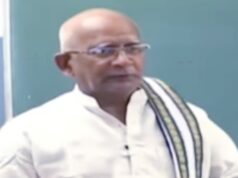