The earlier series on the Telugu world  had mentioned several times that the great men and women of Telugu origin who had been big achievers in the US were Telugus only in name and were Americans.

Most of them identify with the US and have no links with their native land. In fact the ‘Iyer girl’ who  became the first woman in US history to be the Vice-President and may even be in the White House is a Kamala only in name and has always seen herself as a Black and daughter of a Jamaican, Harris. Many went a step ahead to highlight her links with anti-Indian proponents of mass conversion and pointed out she is a devout Christian. She is predicted to back those opposing India on Kashmir and was not an ‘Iyer’ at all.

This did not prevent the Tamil Nadu village of her grandfather from putting up hoardings and banners in her support or celebrating her victory.

The speech writer of US President   (POTUS) John Biden is Vinay Reddy. Telangana reporters have not gone to Pothireddypeta village of Karimnagar district to  find out its response to Vinay’s inclusion in the Biden team which has over 16 Indians.,Vinay is the only one of Telugu origin.

It was from this village that his father, Narayan Reddy, went to Hyderabad to do MBBS before he went as recently as 1970 to settle down in the US. Vinay was born in Ohio to Vijaya Narayan Reddy.He is the middle one of three sons.

Significantly both his parents are from India and they regularly visit it (last only a year ago, in February. 2020). As they could not have left their infant children in the US, Vinay too must have come here as a child — unlike most others of Indian origin in the team .

So it appears that Vinay still has roots in and links to the Telugu land,.though he may not be able to read or  even Like most other Telugus outside, he may not even know Telugu, leave aside reading it. He lives in New York with his wife and  two daughters.

Another Vinay is in US politics. He is also of Telugu origin. And also a  Democrat. Both, born in  the US, are not IT engineers which they would have been — if born in  Telangana or AP. 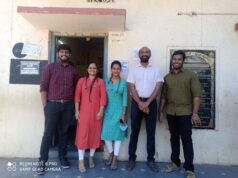 A ‘BJP Vaccine’ for a Biological War