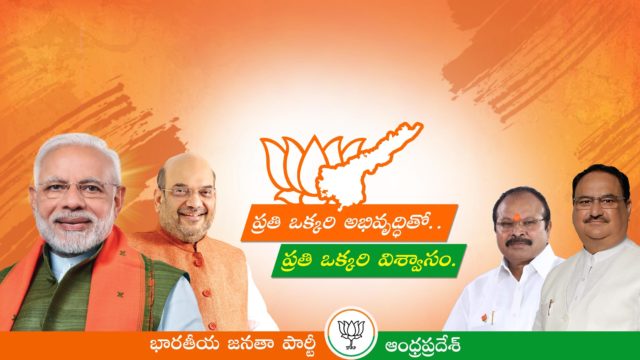 Andhra Pradesh unit of BJP tried to defend the party’s loss in Jharkhand. The party’s contested candidate for the Vijaywada parliamentary constituency and convenor, Dileep Kilaru said the BJP has lost in Jharkhand due to anti-incumbency and it doesn’t mean that the country is slipping out of BJP’s hands.

BJP secured an absolute majority in the 2019 Indian General Election by winning 303 seats out of 545 (2 are nominated from the Anglo Indian community) for which elections were held in 7 phases during April and May 2019. But in less than a year, the BJP lost power in five states and one among them is Jharkhand. In the recently concluded elections to the assembly in Jharkhand, BJP lost to the alliance of JMM-Congress-RJP which won 47 seats out of 81.

The shocking news in the Jharkhand assembly elections was that the BJP’s incumbent Chief Minister Raghubar Das lost from his pocket borough: Jhamshedpur East from where he had won five consecutive times since 1995. Moreover, he lost to his former cabinet colleague and BJP rebel Saryu Roy.

In an interview to a television channel, the state unit of BJP in Andhra Pradesh has fielded Dileep Kilaru in television debates. He said that there were mistakes on the party’s part in Jharkhand but the party will learn. To this end, he refered to the defeat of the party in the states of Chattisgarh, Madhya Pradesh and Rajasthan but the party bounced back in the Lok Sabha elections. In a television debated moderated by Vamsi Krishna, asked Dileep why the BJP was stressing on issues such as Article 370, Ram Mandir and Citizenship Amendment Act which will not directly benefit the common man and the common woman in earning a decent living, Dileep differed with him. In the debate, National Register of Citizens (NRC) also figured prominently which is a register of Indian citizens but has received intense opposition from many quarters in the country, and also cited as one of the reasons for BJP’s loss.

Dileep Kilaru contested from Vijaywada parliamentary constituency for the 17th Loka Sabha and lost to TDP’s Kesineni Srinivas (Nani). But since then he has emerged as the leading figure in the Andhra Pradesh’s BJP. He contested in the election and said it was a ‘fight between the honest and the corrupt. Vote for Narendra Modi to ensure development across the country’. He has emerged as one of the leading spokespersons for the BJP in the state with his national and transnational experience and felicity in languages: Telugu, Hindi and English.