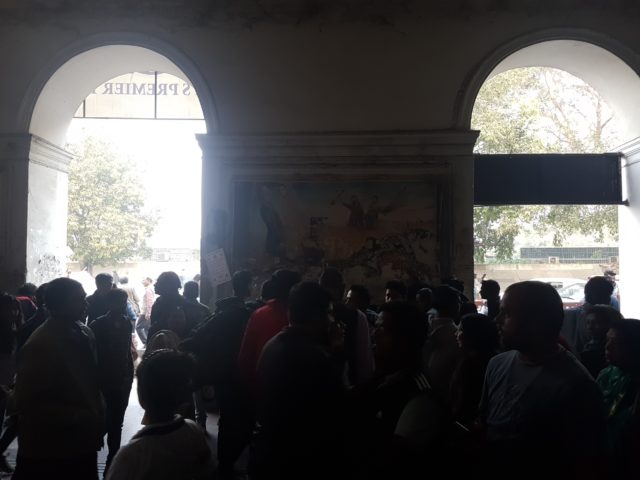 Inner Circus of Connaught Circus, New Delhi: Umaprasad and Shoham rested their bodies by squatting on their haunches by the outer edge of the railing that almost squirted along the semi-circular colonnaded colonial shopping centre.

Umaprasad and Shoham counted their crystal lingams they have had sold, and unsold. If they manage to peddle a couple of them their day will be done, and that profit can ease an uncertain day in the coming days. Uncertain times always hinged in their lives: harassment of the police to a bandha or curfew and to a blockade by one or the other political party.

The traces of sun in the noon had disappeared. The twilight of the sun has begun to spread its wings. In the wings of fading sunlight and in the forefinger of approaching darkness, Delhiites have started to add light and lightness to Inner Circus.

Shoham’s sees a television crew in gentle motion. The crew is on the prowl for some footage and vox pops. Shoham studies the movement of the crew, and the foreign woman in the crew walking like a man with a gun. He says, ‘Will she?’

They assess the television crew. The white woman has a cameraman in the front and camerawoman in the back, and they are accompanied by a sound engineer, two camera assistants and a certified (by Ministry of Culture, Government of India) interpretor. The woman walking like a man with a gun is asking something to the passing-by shoppers but many of them are walking away when she asked more. Two youngsters stop by, and answer the woman’s questions: cameras rolled for recording, recorded.

Umaprasad has no answer for Shoham’s question ‘will she?’ but he has some advice. He says, ‘Make her to listen to you for a second,’ referring to the foreign woman in the crew, ‘say what you have to say as quickly as you can, and look for me.’

Shoham sucks the advice. He thinks about how to overcome the first major danger: being shooed away by that potential customer, and to grasp the customer’s mental inclination – spiritual or aesthetic, or both or none?

Most of Umaprasad and Shoham’s customers are visitors from different corners of India and visiting Connaught Circus, and the time passers or idlers, tourists and five grades of the middle class: lowest, lower, middle, upper, and upper-upper. They know most of their customers are middle-class people but most of the time they fail to identify the person from the lowest-middle class to the upper-upper middle class for their ware has spiritual and aesthetic value. Who in the middle class has money for spiritual and aesthetic objects such as their crystal lingams and who in the middle class has the money to indulge in knowing and buying such a crystal? Most of the days, Umaprasad and Shoham either together or independently manage to sell about half a dozen crystal lingams in a day. The solace of not able to sell their wares is the gathering of metaphysical properties of crystal lingams; if not the money for their livelihood.

Shoham follows the crew. At times, he almost mingles with the crew, and the topic of their conversation heightens his capacity to deduce a meaning, quickly, instantly. The crew moves, and the lead woman of the crew is stopping, and stopping the shoppers passing-by to talk or interact or to interview about them and their sexual lives. She manages to hold a snappy conversations and the moment the word sex spewed from her mouth, many shied away and slipped away. However, she manages to record a lengthy interview with two Sikhs, and Shoham listens.

And, the crew moves.

At a point of time, when the crew moves almost motionlessly and failing to get the attention of a passer-by, Shoham springs to the front of the crew and presents himself before the white woman. Shoham opens his mouth, ‘Madam you know this,’ and lifts up a crystal lingam from his bag and into the air, ‘will bring out yours sleeping sex energy. You know, madamji, all time all people in India buy this or this type. You see in homes, in temples, in offices. Also in chains, bags and pockets madamji. This crystal lingam will—’

As expected, Shoham is asked to shut his mouth and move away by the certified interpretor. But the lead woman of the crew, Ms Amanda Pours, grasps a word from Shoham’s vomiting of words: sex. She is carousing the world in search of authentic sex stories for the sex-starved or sex-saturated American audience. Especially at a time, when the Donal Trump’s Presidency has given a new dimension to the news: real news and fake news.

With the word ‘sex’ sitting in her head, Ms Amanda Pours turns her head from Shoham to Mrs Adarshini Kaul, and indicates – I want to hear from him. Shoham explains, ‘This crystal madamji is two in one madamji. Man and woman going in and going out and coming out sex energy and children madamji.’ He thrusts a crystal lingam into her hand, and continues, ‘You try, please, madam ji.’ Ms Amanda Pours feels the crystal lingam, as she feels it, Shoham explains more about the crystal lingams: ‘Madamji, you take one and keep one in home you….you…you…you family all have children. No stopping children by anyone madamji. Sex and children come and come till you go upwards. Money, sex all time in your life madamji.’
On the spot, Mrs Kaul, in the spot, struggles to interpret the beliefs and the rituals associated with lingam and yoni the usually unspoken emblems of a stream of Hinduism but worshipped.
‘Sex power and spiritual power in this madamji,’ Shoham emphasises, ‘all people coming India buy this madamji. Black people, white people, Chinese people more madamji.’ Shoham gently moves his hand holding few crystal lingams, and with the attention of Ms Amanda Pours on his hand, up and sideways and up till it is in aerial sync with Umaprasad at a distance.
A pyramid of multi-coloured lights shoot up into the air: heavenwards, heavenly sparkles.
‘Madamji,’ Shoham says but he is interrupted.

‘How much one?’ Ms Amanda Pours asks.

The conversation and transaction ensues between Shoham and Ms Amanda Pours; and Umaprasad comes closer to them with a bag of crystal lingams, and also two bored beat constables of Delhi Police.
—Kovuuri G. Reddy

[This short story was first published on Telugurajyam.com in 2018]