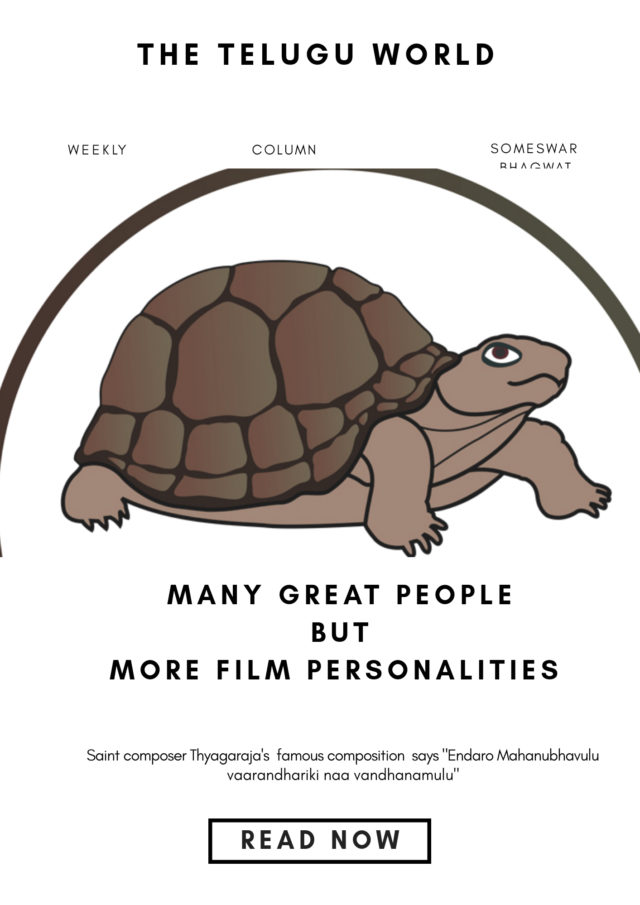 Saint composer Thyagaraja’s famous composition says “Endaro Mahanubhavulu,  vaarandariki naa vandanamulu” (ఎందరో మహానుభావులు, వారందరికీ నా వందనములు) which means “There are many eminent persons. I salute all of them”. There are many Telugu people who achieved eminence outside their state(s).  This column wants to first pay tribute to them, then to non-Telugu people who have served in these two regions, adopting their language and culture as their own and, lastly, to great Telugus who served these states I am not familiar with. This order has only one main reason: I started with the proposition of the eminent academician and first vice-chancellor of Andhra University at Waltair, Sir Cattamanchi Ramalinga Reddy, that “Andhras like rice, thrive only when transplanted.” And also because, as one born and brought up outside the state(s), I lived very briefly in either of them.

Among those Telugus who achieved prominence outside the two states, I start with my own profession, journalism, though it cannot be claimed that the list is exhaustive. The most prominent among them was Sir  Chirravoori Yajneswara (Sir C.Y.) Chintamani, who was described by the Rt. Hon’ble V. S. Srinivasa Sastry as the ‘Pope of Indian Journalism’. Hailing from Viizianagaram, he was born on Ugadi day in April 1880 and died on July 1, 1941. He became the Editor of Vizag Spectator, Visakhapatnam, at the incredible age of just 18 years.

(Shoebullah Khan, also from a Telugu state, Telangana, was the  editor of Imroze  Urdu daily at 20, and was brutally murdered by Razakaaars – now called MIM– an ally of the ruling party, and had his hands cut off for opposing the Nizam’s plan to join Pakistan. But for Sir C.Y., Sheob’s editorship at age 20 would have been a record.  His centenary,   in 2020, goes unnoticed).

My father recalls a story in the Maharaja’s College, Vizianagaram, where Sir C.Y. also studied earlier, that he could recite the full editorial of The Hindu, (then) Madras, the next day from memory. “Weilding the pen like a sword, Chintamani dominated Indian journalism in the first three decades of the 20th century and made great impact as chief editor of the Leader. He rose to be a minister, Liberal Party politician and parliamentarian,” was how I described him in my book (A Town Called Penury- the Changing Culture of Indian Journalism). I also wrote: “No discussion on the freedom of the Press can be complete without mention of his clash with Motilal Nehru, father of Jawaharlal Nehru, who was chairman of the Board of Directors of the company which published the Leader. Motilal had a difference of opinion with Chintamani, but the eminent lawyer believed so strongly in editorial freedom and the supremacy of the Editor, that he decided not to sit any more in the Leader building, lest the editor should feel constrained. Within a year Motilal left the organization.”  From 1927 to 1936 Chintamani, who led the Liberals, was the leader of the opposition in the Legislative Council of UP and was also its Education Minister.

Differing with the Indian National Congress and Mahatma Gandhi, the Liberals did not want to participate in the Non-cooperation Movement and left the Congress. Sir  C.Y. who was knighted by King George VI on September 20, 1939, attended the first Round Table conference in London in 1930-31 as a special guest. Both the British government and Gandhiji were greatly influenced by his editorials.

Those days newspapers were not an industry but were tools in the freedom struggle.  Kotamraju Rama Rao of Andhra was the founder-editor of Jawaharlal Nehru’s daily, the National Herald, Lucknow. There were also newspapers run purely as business, like the Sind Observer, Karachi. Its editor was Rama Rao’s elder brother, K. Punnaiah, worked in several dailies and became editor of the Karachi daily.  Both the brothers were staunch nationalists. Nehru was touring Sind and the management did  not want him covered. Punnaiah, as editor, directed all correspondents to cover Nehru extensively. The irked management, in an event unique in world journalism, sent a bill at advertisement rate to the editor for the space consumed by the Nehru reports. Walking out of the newspaper, Punnaiah collected funds and bought over the newspaper. Just then partition came.

Punnaiah fled from Karachi when India was partitioned, before he could restart the daily. He was found dead in a gutter in Bombay, murdered. Rama Rao fell out of a train and died. His son, K. Vikram Rao, a long-time president of the Indian Federation of Working Journalists and a Lohiaite, was a co-accused along with George Fernandes in the Baroda dynamite case and may have been hanged if Indira Gandhi had her way. But Emergency was lifted and the Congress voted out of power before it could happen.

My father who was in the Press camp at the  1939 Congress session at Tripuri in MP (near Jabalpur) recalled how Punnaiah and Rama Rao met at the session after long and heard Punnaiah asking about some relatives who he did not know had passed away.

Another eminent Telugu journalist at the national level was Kundurti Ishwar Dutt (1898-1967). A close associate of Sir Mirza Ismail who was the Dewan of Mysore and Nizam state (now Telangana) he went wherever Sir Mirza did, as his Director of Information. He is famous for his books The Street of Ink, Sparks and Fumes and My Portrait Gallery.  His brother’s sons also became journalists; the elder, K. Jagannadha Rao, retired as PTI sports editor and the younger one, named Ishwar Dutt after his uncle, was my trainee in in a Hyderabad daily in before joining The Times of India at Bombay.

I will write of many more eminent persons, journalists, spots persons, artistes, scientists and eminent lawyers, but the list of ‘eminent’ Telugu film persons (whom I will ignore), dominating the film industry in Chennai, is longer than all of them put together.

That symbolizes the Telugu world of today.