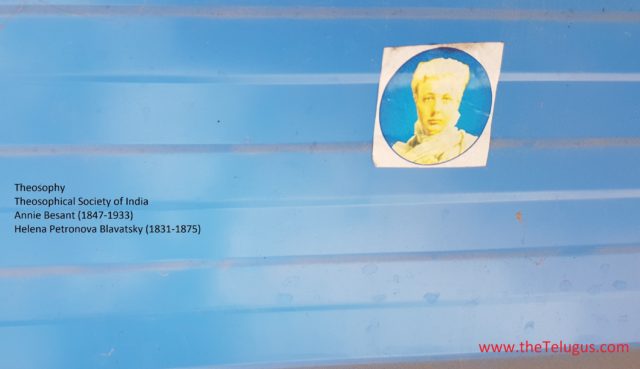 A society related to theosophy called the Theosophical Society was founded in 1875 encompassing the Greek philosophies of Greek and Alexandrian Neo-Platonic thoughts and Indian religious philosophies ranging from Vedanta and sufism to Qabbalah and Mahayana Buddhism. Helena Petrovna Blavatsky, a Russian origin occultist and was the co-founder of this society.

One of the followers of theosophy was Annie Besant, who lived in India at the time of British rule. Annie Besant (1 October 1847 – 20 September 1933) was a theosophist. She supported the Indian and Irish indepdence from British rule. She was a prolific writer, philanthropist and women’s rights’ activist, and mentor of J. D. Krishnamurthi. In India, her contributions include in founding of Benares Hindu University and for BT College in Madanapalle.

Theosophy is also a system of belief and practice of the Theosophical Society. According to the founders of BT College in Madanapalle, Chittoor district, Andhra Pradesh, India: “Theosophy is the body of truths which forms the basis of all religions and which cannot be claimed as the exclusive possession of any. It offers a philosophy which makes life bearable and which demonstrates the justice and the love which guide its evolution. It puts death in its rightful place as a recurring incident in an endless life, opening the gateway to a fuller and more radiant existence. It restores to the world, the science of the spirit teaching man to know the spirit as himself and the mind and the body as his servants. It illuminates the scriptures and doctrines of religions by unveiling their hidden meanings and thus justifying them at the bar of intelligence, as they are justified in the eyes of institution.

“Theosophy is unlimited wisdom, abstract in its essence but capable of an infinite expansion. The significance of what we seek to understand and attain as theosophists is heightened by the use of nonreligious and nondenominational word ‘theosophy’ a word which associates us with those seekers in the past who were not content with the dogmas of their time but addressed themselves to an original enquiry into the deeper nature of things. There is of course no finality in the wisdom of the sense that what we seek to understand, lends itself to an endless quest of understanding.”