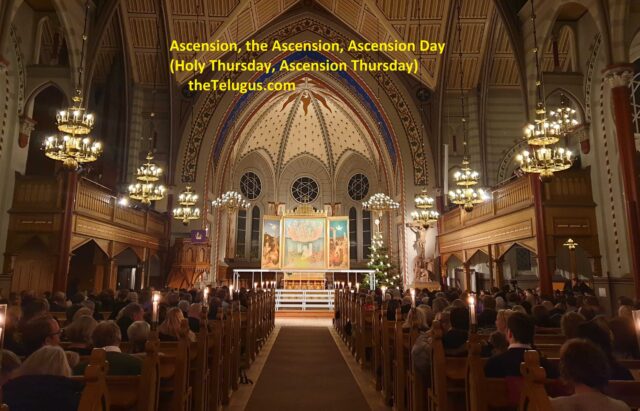 Did you notice the Ascension Day, also known as Holy Thursday or Ascension Thursday?

Do you observe Ascension Day, or noticed it?

Ascension Day is one of holy days in the Christian calendar. Ascension Day is also known as Ascension Thursday, and Holy Thursday. The day is marked to commemorate the Ascension of Jesus into heaven, and it is observed by attending a service of worship or mass in a church. It has no fixed date; observed 39 days after Easter.

Ascension Day is the day on which the Ascension is commemorated in the Christian Church: that on Thursday, the fortieth day after Easter. It traditionally commemorates Jesus Christ’s ascension into heaven according to Christian belief. 40 days after Jesus’ resurrection, his disciples went to Mount of Olives, near Jerusalem. Traditionally, Ascension Day is celebrated on a Thursday, buy some Christian denominations have moved the observance to the following Sunday.

The Feast of the Ascension of Jesus Christ has inspired some painters.

Ascension Day is one of the universally celebrated ecumenical feasts of Christian churches (other feasts are feast of the Passion, of Easter, and Pentecost).

“Ascension developed as a separate celebration only slowly from the late 4th century onward. In the Catholic tradition, it begins with a three-day procession to ask for God’s mercy, and the feast itself includes a procession of torches and banners symbolising Christ’s journey to the Mount of Olives and entry into heaven and an all-night vigil. The Anglican communion observes the feast but most Protestant churches have abandoned the tradition,” Sarah Robertson writes in Metro.co.uk.

“The peculiarity or rather, the specialty of this church is that this church is situated inside premises of Lawrence School, unlike other shrines in the place. The ceremonial uniform wearing parades lead the worship on Sundays, which is a rare scene these days,” Garima Bahl writes, in Travel Traiangle about the Church of Ascension in the campus of the Lawrence School in Lovedale, Ooty, the Nilgiris district, Tamil Nadu, India. “A true lover of Jesus Christ cannot leave the place without shedding a drop of tear on seeing through the glass altar panel that is stained. Also, the big pipe organ in the church attracts eyes.”