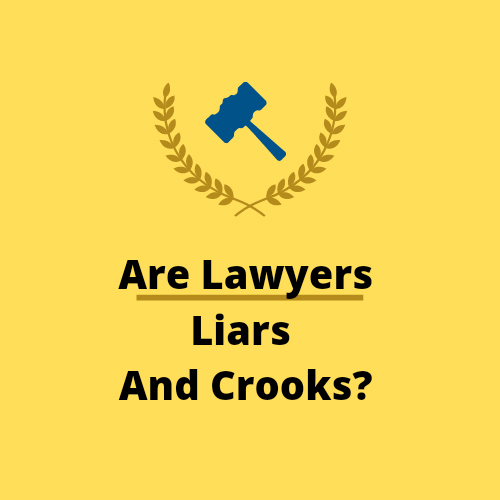 There are tons of puns in English  on lawyers and  liars. One, says:  “How do lawyers sleep?  It is simple. They first lie on one side and then they lie on the other.”

Lawyers are also butt ends of many jokes like  —   There was a tombstone that read: ‘Here lies  John Smith, a lawyer and a gentleman’. A passerby remarks ‘How strange? They buried two men in one grave!’  The implication is that a lawyer cannot be a gentleman.  There may even be a book exclusively on lawyer jokes. .

A common perception is that lawyers are liars and crooks. Many politicians being lawyers and the belief that all politicians are crooks prove this notion. Mahatma Gandhi, Dr. Bhimrao Ambedkar, first PM Jawaharlal Nehru, his millionaire father Motilal, and the architect of communal partition of India Mohammad Ali Jinnah (father-in-law of another famous jurist M. C. Chagla), were all lawyers as are most Central and state legislators leaders.

The West’s Rule of law and India’s Dharma depend  on the principles that everyone is innocent unless proven otherwise and ‘Let a hundred crooks go free but let not one innocent be punished.’

However these were distorted  and thousands of crooks are  acquitted, even in the land of freedom, the USA. So when a former Chief Justice of India Ranjit Gogoi, MP, said that the justice system in India had turned into something unintended  and “when you go to court you regret it”.

This and his remark that “you want a 5 trillion dollar economy, but you have a ramshackle judiciary” had raised a storm.  However, one has to ask why pendency of cases is growing and Judges too ‘reserve’ verdicts that come decades after a case is filed. The third axiom of law, ‘justice delayed is justice denied’ is overlooked.

Are lawyers who seek adjournment after adjournment on flimsy grounds and judges who grant them or ‘reserve’ verdicts to a later date responsible? Lawyers defended a terrorist caught red-handed, Kasab, heinous criminals like the rapists of Nirbhaya or  took up cases even after knowing the guilt of their client simply because a ‘lawyer cannot refuse’ and what the client tells the lawyer is ‘privileged’ and so cannot be disclosed.

Lawyers for Kasab, Nirbhaya rape accused or similar criminals  say they were only ensuring that the clients get punished just on the right grounds and that no legal provisions are overlooked.   But a lawyer’s income  depends on the number of cases won, for which they resort to legal hair splitting and ‘interpretations’ of procedures that would set the guilty free.

If no lawyer is representing one, the court appoints one to act  curie.  The letter of the law takes precedence over the spirit. It is felt that, at least in the former corrupt administration, lawmakers decided loopholes first and conveyed them to the accused even before a law was made. Lawyers are deployed by big firms, to tell them how to evade law. Some are also known to have helped  the other side  for their own client’s defeat – just for money.

And now allegations of corruption in the judiciary compound the problem. A woman judge of the Nagpur bench of the Bombay High Court has acquitted, in two consecutive cases, the accused in rape cases on technicalities, eroding trust in the judiciary. She may be right and popular perceptions may not ‘stand the test of law’. Legal intricacies in the two cases may have justified the acquittal.

Years ago a case alleged that the  Chief Justice of a High Court wanted to travel at tax-payers’ expense for medical treatment to a particular US town not known for medical excellence, as his son happened to be studying there,  just before he retired.

It was, perhaps, perfectly according to rules, as was the purchase of land by a close relation of the dynasty in power, with a meagre loan from a company to sell the same land to the same company for a huge sum. It may be a legal commercial transaction, but was it just?

An  editor used to laugh at people building houses, saying that they could as well occupy someone’s house, stay there for decades till legal eviction procedure is completed and then occupy another.  He was murdered: perhaps an expedient way to solve an issue that would take decades for courts to decide , This is mostly due to lawyers who seek adjournments as in the TV advertisement that shows  ‘tareek pe tareek’  till lawyers on both sides grow old arguing the same case. Out of this arose a new job – of ‘experts’ who would violently evict tenants refusing to vacate.

The film based on Agatha Christie’s famous novel, ‘Witness for the Prosecution’ ends with the  prime witness, the accused, being killed in the open court and a lawyer saying, “No, it is not a murder. It is an execution.”

Another joke says a young lawyer boasted to his lawyer father how he won a case in just two hearings but the father tells him he was a fool as he could have dragged it in for years and made big money.

Lawyers like Ram Jethmalani,  Kapil Sibal,  and Abhishek Sanghvi , incidentally also politicians)  charged lakhs of rupees per appearance in court. A big group of such lawyers argued in the Ram Janmabhoomi case while the God’s side was taken up by a very old man single handedly. He also stood for weeks in the court arguing even when a seat was offered by the Bench — and won.

Judicial reforms and the Law Commission overseeing legal proceedings has not helped. No one did a case study of the long-pending cases to see how many of the adjournments were unjustified, if not actually frivolous, and who was responsible for them. Is the predominance of lawyers in the legislative bodies responsible for it? And with so many legal experts among lawmakers, why are laws made which lend themselves to many interpretations by lawyers?

Perhaps all these questions have just one answer — the old adage ‘let the sleeping dogs lie’.

‘Have You Written to Your MP’ Campaign