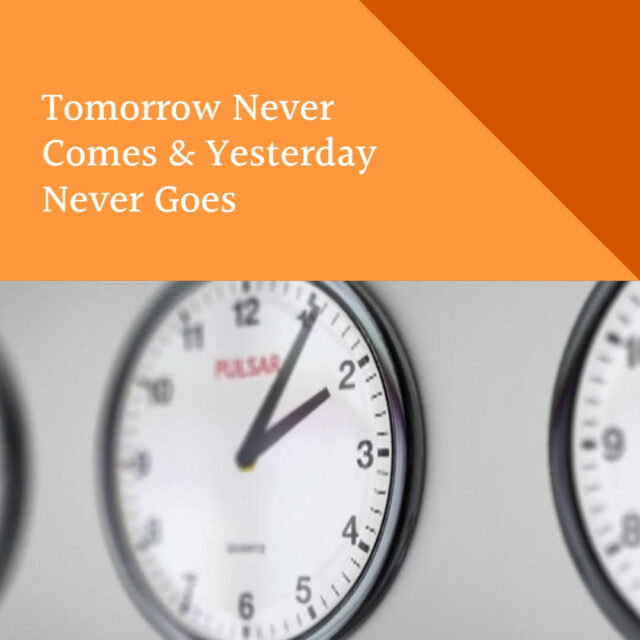 Every language in the world has some axioms or sayings, some of which, proverbially popular,  turn  proverbs. Most languages have their own similar-meaning ones. All must have originated with someone using  it for the first time —   or ‘coining it’. For example the shop that coined Hindi  ‘Aaj Nagad, Kal Udhar’     (Cash Today  Credit Tomorrow’) was a pioneer in applying the axiom ‘Tomorrow Never Comes’, Equally significant is the saying  ‘Yesterday Never Goes’ meaning the past cannot be wiped off, ignored or altered.

You can say, like Lilian Roth in the famous film of that name “I’ll Cry Tomorrow’ to remember ‘Kal Subah Hogi’ with the haunting song ‘Kiske Roka Ruka Hai Savera,’  (Who can stop the dawn). that tells you the daker the night the brighter and more colorful is the morning.(RAt jini hi sangeen hogi, subah utneeehi rangeen hogi). Those are words that drive despair away.

Etymologists search for  words’ origins just as the Place Names Society of India at Mysore goes into how a place got its name.  (It is just a hearsay: in several visits to that town I could not trace it). The name  ‘Humberton Bridge’, in Chennai named in honour of a British officer, now turning  into Barbers Bridge as ‘Ambattan’ means barber in the local  language , is more likely than its originating from the name Hamilton Bridge, as a Tamil book claims. Both may be wrong.  In reality it may have come  from the roadside barbers sitting under it, as is normal in the scorching Indian sun.  Research alone can find the truth. But does it matter?

Tennyson can say ‘Old order changeth, yielding place to new’ but some liberals, in the name of secularism, are against the change of city names, from the ones imposed by Muslim rulers on the Hindu majority, to  original names which are still known to people.  Do a majority of people of Alahabad want it named after Allah? Or do they prefer Prayag Raj as the BJP government likes to call it? It depends  popular practice.

The locals still prefer  Palamur , not ‘Mehboobabad’ hoisted on it by the Nizams, but the Telangana ruling party TRS, in anticipation of opposition by Majlis Ittehad-ul-Muslimeen, its political ally, sticks to it,  just as it chose not to celebrate the birth centenary of Shoebullah Khan. The 20-year-old Shoeb who was editor of Imroze, was  murdered and his hands cut off by MIM’s  earlier version, the Razakars, for opposing the accession of Telangana  to Pakistan, planned by the Nizam.

Similar considerations may be behind opposition to names given by rules like Aurangazeb and the Nizam. Or it may  just be agreement with  words of    Shakespeare’s  ”What is in a name? A rose by any other name would smell as sweet.”Wil Hyderabad’s name given by the Nizam in honor of some forgotten Hyder,  be changed back to Bhagyanagar? it depends on the Bhaya (fortune) of  party that gets elected without the support of MIM