A ‘trick of the trade’ in public speaking is: throw in a quote in Sanskrit, Persian or even better, Latin or Greek and it impresses the audience.
The less intelligible it is the more impressive it may be. We all.know  ‘going Dutch’ (splitting the bill) in restaurants started when a Dutch man went to a bar,  fired a gun,  and ordered ‘one more peg for all’ an order he repeated several times, saying,  “when I drink all drink.” In the end he paid his bill and left, saying “when I pay all pay.”

Those who were thrilled by free drink offer initially were silenced at the end by the smoking gun. But it was obviously not due to not understanding or his words being “Greek and double Dutch” And yet this expression for any words spoken which could not be understood continues for centuries. Perhaps it has  to do with Greek being a classical lingi and Dutch a less common European one.

I member the hours I water as a teenager writing ‘temporafugia‘ on all my books and note pads to remind myself that time flies and should not be wasted. When I said  nil nisi bonum.(never speak ill of the dead) my friend CN googled immediately and.sent a WhatsApp message:  “The Latin phrase De mortuis nihil nisi bonum “Of the dead, [say] nothing but good”, abbreviated as Nil nisi bonum, it is a mortuary aphorism, indicating that it is socially inappropriate to speak ill of the dead as they are unable to justify themselves. Wikipedia”
Hd added “the  equivalent in Sanskrit could be ‘satyam apryam na-brooyat’. But it isn’t about dead but powerful persons. A shloka preaches ‘Satyam vada, dharmam chara’ (say the truth and observe dharma) but don’t utter inconvenient truth. So, Greek and Indian thinkers have many things in common!”

Then I reminded him of a Latin, not Greek say: ‘Cogito ergo sum’. The first principle of , the great  philosopher Descartes, it means °I think, therefore I am.”  It implies that thinking is a human prerogative, that Man alone can think while other creatures only feel. Say ‘Vasudhaiva kutumbakam’ in Sanskrit to think of the entire universe as one family. That rises above the Latin level of only Man and thinks of the whole universe as one family.

You have a choice whether to think of Latin or of Sanskrit. 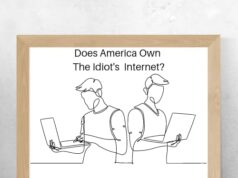