Can A Sloka Help

One of the signs of old age is losing memory of recent past while recalling decades old incidents. That is why many elders misplace their specs or wallet but  recall their childhood experiences. The trouble starts when they forget that they told the same ‘story’ very recently

This phenomenon is attributed to the fact that different parts of the brain control recent and old memories.  A friend in a distant city who speaks every day (thanks to a recent invention, the cellphone) surprised me saying he could recover any lost thing by reciting a sloka (hymn) in Sanskrit and had great faith in it as it never failed even once. He sent it to me on WhatsApp (another great recent invention) and it worked when I misplaced the key of my room.

Then I lost something else and discovered that I had misplaced the sloka itself. I asked him to send it again but he could not – perhaps to forgetfulness or also misplacing it.

Then I discovered that it was not the only sloka which could do the trick. After that I recited, to myself, the first verse of Sant Tuslidas’ famous chant, the Hanuman Chalisa, one of the most recited Hindu chants and soon found what I had lost. While the friend did nit send me the sloka till now I found that there was a substitute for it and it served the purpose. After all what is important was not the wording but the finding of the lot thing. Then I recalled a speech by Acharya Rajneesh, the Jain muni who later became a world-renowned mystic Osho with a following in many nations and an international commune in Pune city in Maharashtra. He said what was important was repetition of a word, whether it was Ram Ram Ram, the name of the Hindu God, or just Cocacola, Cocacola. What worked, Osho said, was the faith that it would work and not the word itself. Then I found other thinkers who stressed the importance of repeating the name of the God.

Then I leant about the placebo effect in modern medicine. In medical trials it was found that the percentage of people who were cured by a chemically neutral was almost the same as those who were  cured by a new formulation  being tested on a controlled sample of people; many got cured by the belief in the efficacy of the medicine rather than the curative chemical effects of the  new formulation. However the new formulation if effective, was needed because it is not always possible to create faith in the ‘effectiveness’ of the placebo.

Almost the entire ‘miracle’ of faith curing, the mainstay of Christianity and sainthood, also depends on this faith. However, when you Google placebo and sloka to find lost things you get a medical explanation of a placebo and a write up  on  Gayatri mantra, the ultimate Hindu hymn,  as if Hinduism alone depends on faith and all other religions are factual.

It is a matter of faith and belief, like Communism the latest of religions. 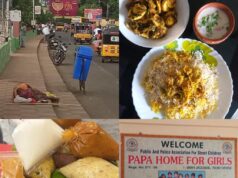